Mark Blackard Life on the Overstay Road
Home About

My name is Mark Blackard but everyone outside of the United States just calls me Marcos. I travel, drink wayyyy too much, write, and make badass movies for YouTube. I believe in free speech, less government, and cold beer. I’m currently a resident of Planet Earth and a Citizen of Nowhere. That’s the Reader’s Digest version, my friends. 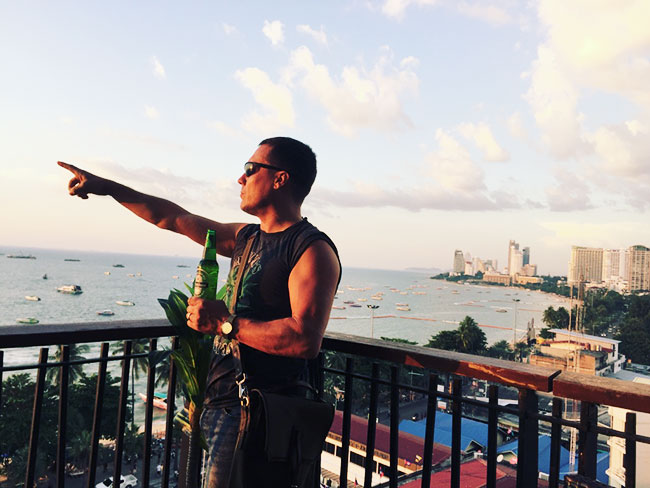 I’ve held many titles during my travels. In my younger years I poured concrete, hung sheetrock, swung a hammer, shoveled horse shit, and worked as a day laborer. On the more serious side, I’ve been a paratrooper, a paramedic, a police officer, and a narcotics agent among other things. In 2008 I got bored of working drugs so I did a couple of tours embedded with the U.S. Marines in Fallujah, Iraq. Afterward, I did a year in Afghanistan running an undercover counter-terrorism team comprised of local Afghans (the catalyst for my first book).

In 2010, I left Afghanistan and wrote Killing Sheep: The Righteous Insurgent while backpacking across Southeast Asia. What credentials did I possess to become a writer? Absolutely none. I often tell people that I’m not a writer. I’m just a dumb redneck who knows how to type. Or, I guess these days it’s called keyboarding?

Fueled by anger from my experiences in Iraq and Afghanistan, along with being drunk on rum (imagine that), the book turned out to be less than politically correct. I released it on September 11th, 2012. It was my demise in the world of working for, or being a contractor to, the U.S. government.

It felt good to break bad and say what I really wanted to say. It felt good to finally make a change. From birth, I’ve been raised as a conformist like most poor people in America. You know, pay your taxes, wave the flag, don’t question authority, support any and all unnecessary military excursions, and do everything the nice gentlemen in Washington D.C. tell you to do. Screw that. I’m too well informed now. My next twenty years will be spent focusing on the lighter things in life. Conformity is a bad word that is no longer in my vocabulary.

Watching Miami Vice in the 80’s inspired me to want to become a narcotics agent. I had the opportunity to live that dream for many years throughout my career. The nostalgia of getting to join Sonny Crockett in the rank and file of those few who have been featured on the cover, was overwhelming. It pretty much made everything negative in my life seem insignificant.

I continually preach that life is short. Why not live out as many of your dreams as possible? I certainly do. Create a bucket list and get after it.

Where Am I Right Now?

I’m probably in Thailand. If not there, try Cambodia, Laos, Vietnam, or the Philippines.

I live life by the following three principles:

#1. Life is short
#2. Life is about a series of adventures
#3. Never turn down an adventure

A friend of mine named Abe, who I met in Afghanistan, is the author of an excellent book on Islam. He didn’t advertise the fact he had written a book because he is a very humble guy. Once I discovered he was a published author, I decided to pick his brain for professional advice and guidance. With pen and paper at the ready in order to take detailed notes, Abe begin to lay out the recipe for becoming an author.

“Yeah, go ahead my friend. Tell me what the secret is. Give me the whole process.”

I wrote that down and waited for more. Silence ensued as Abe looked out the window, taking in the scenery. Abe acted as if he had accomplished the task at hand.

“That can’t be all there is to it. You have to be somewhat scholarly to be able to write a book. How did you do it?”

“Bro, English is not even my primary language. I’m just a poor man. I had to ride a donkey across Iraq in order to escape Iran. You think I’m a scholar? Just start writing.”

It was simplicity at its best. Abe had dissected the entire publishing industry in just a few words. I would take his advice and put it to use. I would test my resolve by writing a book about our adventures in Afghanistan. To be honest, I really didn’t think I could complete a manuscript. I had started two in the past but neither survived the first thirty pages before I lost interest.

Admittedly, I am no scholar. I write the way I talk. My editor utilized the word “colloquial” when describing the “tone” of my first book. I didn’t even know what the phrase meant. I had to look up the word “colloquial” in the dictionary to figure it out. All the credit must go to my editors for turning documents full of jumbled thoughts into something readable.

During a discussion about business and making money, a friend of mine with a PhD once told me, “People want to be entertained. Don’t forget that.” Whether you agree or disagree with the messages within my material, I do hope the stories entertain you.

It is very humbling for a person like me, to believe someone would take the time to read a book or a blog post that I have written. It’s a concept I’ve yet to grasp. I want to thank you for giving me the opportunity to share my adventures with you, through words. You are bestowing an honor upon me by reading my material.

I sincerely thank you for your time.

I am a staunch supporter of the First Amendment and freedom of speech. Conformists and conventional thinkers always tow the party line and never risk being the opposition. To many, this is the definition of patriotism or being a team player. However, it’s a very easy road to travel. I personally believe that dissent is the ultimate form of patriotism. Dissent, of course, is not often well-received and is a very difficult path to take no matter the topic. Whether you’re in government or the private sector, you most certainly take a risk if you speak up and go against the masses. However, the following quote is to live by:

…there comes a time when silence is betrayal. – Dr. Martin Luther King, Jr.

My second book is called The King’s Chronicles: how to escape the wrath of American women and live like a king. It’s my philosophy on how to deal with the vixens in the U.S. and their evil ways. How in the hell did I come up with the genius contained within the text? Well first of all, I wrote the book while drunk on rum. For some reason, rum inspires my creative side. Also, I’ve got three divorces to my credit and more ex-girlfriends than I can count. I learned all of my lessons about American women the hard way.

A few friends and I decided to publish some of our experiences so that the younger generation of American men can learn from our mistakes. I wrote the book for my fellow man but women can benefit from the philosophy as well. No, I don’t have all the answers but the book will invoke thought.

In 2010, I made the decision to give away all of my material possessions. Why? Because the stuff no longer mattered to me. I viewed the things I owned as anchors which were keeping me tied down. You can’t travel and survive on the cheap if you have to fork over money every month to pay rent on a damn storage locker. Nope, just get rid of the junk. The easiest method for me was to give it away because I’m not a salesman.

A friend once told me that his buddy had a complex philosophy on owning property. It went something like this:

Never own more shit than you can put in two suitcases.

It was time for me to thin the herd. By the latter part of 2012, I had succeeded with Project Giveaway. Now, the only property I have in tow is a laptop, some camera gear, and a few clothes. This allows me the freedom to embark on any adventure at a moment’s notice. I feel absolutely free for some strange reason. I no longer have the desire, nor the urge to obtain or possess material things. I don’t even own a watch. I take that back—I do have one watch but it hasn’t worked in years. I set the time for 5:00 o’clock and it never changes. When I wear it, I always feel like it’s time for a beer.

My new standard of success has been simplified to having food to eat and beer to drink. It is my intent to live out the rest of my days on this earth as a minimalist.