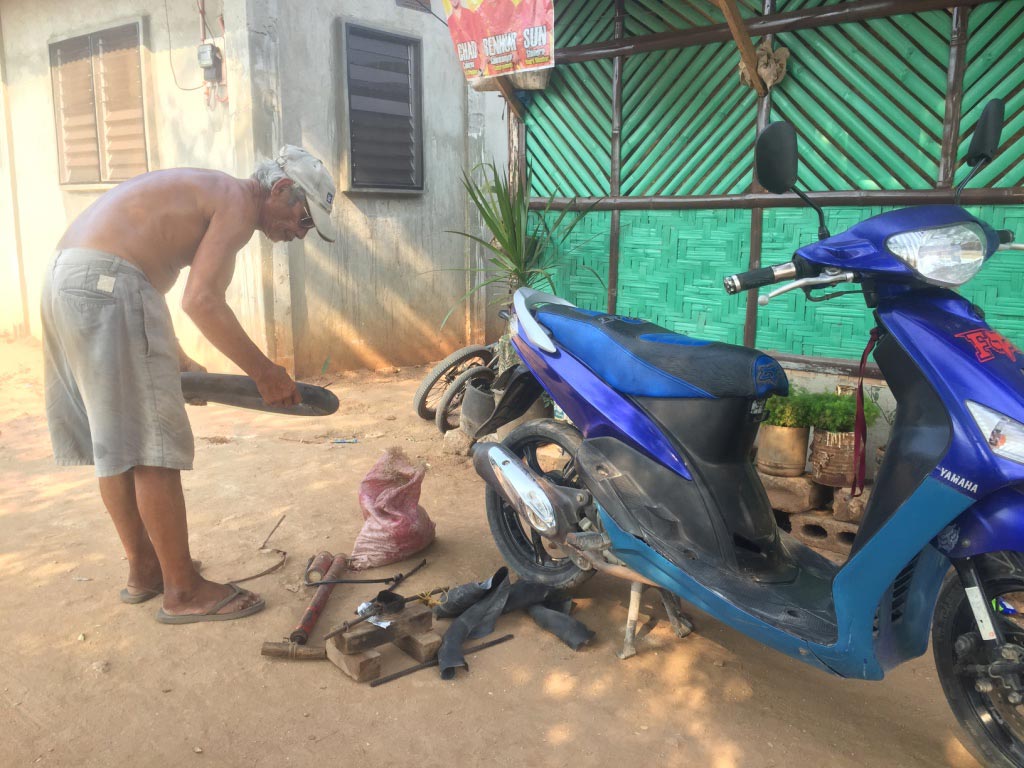 My girlfriend told me we had too much weight on the motorbike. I disagreed. We were in the process of delivering a few bags of rice to some friends over on the far side of the island and I didn’t want to make two trips. I added up the weight and it was basically the equivalent of having four passengers. In the Philippines, it’s not uncommon to see four or five people on a small motorbike. It should handle it.

The motorbike got us there ok and we dropped off the rice. When we got ready to leave, I thought that the handling was a bit off. After a couple of kilometers, I conceded that the back tire was flat. Damn.

I pushed the bike a few hundred meters until some kids told us there was a vulcanizing shop at the top of the dirt road to our right. We headed up the small hill and was met by a lady who indicated we were in the right place. I saw no signs or tools that advertised a tire repair shop.

The lady disappeared and returned with an older gentleman who turned out to be her father. While he inspected the tire, I quickly formulated the opinion that it could not be fixed. The tire itself was split in so many places that it looked like it had run over 30 razor blades. There was no telling what kind of shape the inner tube was in. I started thinking about plan B but the old guy said he’d give it a try.

This should be interesting.

The gentleman gathered his tools and went to work, right there in the middle of the dirt road. During the process, we had to drag the motorbike out of the way several times to allow vehicles to pass. After removing the inner tube, it was apparent it had previously been repaired at least a dozen times. It had battle scars all over it. A quick dip in a big bowl of water revealed some leaks.

He put the inner tube in a clamp and sat the heat on top. I assume this just melts the rubber until it flows back together and closes the hole.

I decided to take a nap on a bamboo couch nearby. There was nothing I could contribute, anyway. I woke up about an hour and a half later and the job was almost complete. The gentleman started to air up the tire with the hand pump but got winded. He drafted his daughter into doing the hard work while he checked the pressure by thumping the tire with a metal pipe. The granddaughter looked on and supervised.

Sure enough, he fixed the tire. For a two-hour job, he tried to charge us 40 pesos. That’s the equivalent of 89 cents. For less than one U.S. dollar, the motorbike was ready to roll. I was happy that the gentleman charged me the local rate and not the foreign guy inflated price. I gave him 100 pesos and thanked him. His eyes lit up.

Now I can buy a bottle of Tanduay (rum) so I’ll have enough energy to climb a few coconut trees this evening.

He was dead serious. You had to be there to appreciate how funny it was. I guess there’s nothing like climbing coconut trees while you’re drunk on Tanduay. The extra energy should make the job a breeze. I love that guy.

We rode back to our room and called it a night. The next day I fired up the motorbike to head out on a new island adventure. My girlfriend jumped on the back and in unison, we looked down to inspect the tire.

It was flat as a pancake.

It wasn’t that the repairman did a poor job. It was just that he had tried to perform a miracle on an inner tube that should have been scrapped a decade ago. That damn inner tube had more holes than a golf course.

The next time I head that way, I’m going to take my new friend a bottle of rum and surprise him.