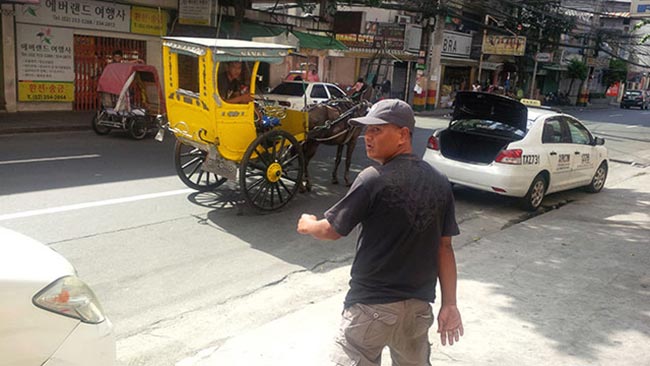 This is a quick post about an incident that a friend of mine and I witnessed the other day. It started out as we were having a drink at a small bar in Ermita. We were sitting outside just watching the traffic go by. My friend began to explain that he had overheard a Korean tourist complaining to the manager of the hotel about getting ripped off by a horse and buggy driver. The Korean guy said that the buggy driver quoted him a price of 500 pesos for a short tour around the area. When they arrived back at the hotel, the guy changed the price to 1,500 pesos. As he attempted to dispute the transaction, both the driver and his assistant became aggressive and demanded payment. The Korean guy felt threatened and paid the money to avoid conflict. He was complaining to hotel management because the horse and buggy was always parked out front as if it were affiliated with and / or endorsed by the hotel.

As we discussed the topic of the moment, a horse and buggy pulled up right in front of us. There was an American tourist on board, along with the driver and his assistant.

“Watch this. Let’s see if this guy suffers the same fate as the Korean.”

While traveling, it is wise to mind your own business and not get involved in affairs that don’t concern you. However, we just couldn’t resist in this particular situation.

With that, we abandoned our beers and rolled in strong on the trio. The sudden show of force startled the two scam artists. We yelled to the poor American guy and asked if he was ok. He took it as an opportunity to escape the predicament and jumped down off the buggy.

While listening to the gentleman, the driver and his assistant got down off the buggy and confronted us. They demanded the 1,500 pesos.

“Hey man, are you the same guy who scared the shit out of the poor Korean guy this morning? I bet you are. Matter of fact, let me call the police for you.”

The guy kept arguing so I took it as a photo opportunity. I told him to smile for the camera motherfucker and started taking pictures.

That, he didn’t like and retreated to the buggy. Since his strong-arm tactics weren’t working, he decided to change his strategy.

“But, what about the horse?”

He pointed at the horse and claimed the horse hadn’t eaten in days. While my partner and I were arguing with the guy, the American got the heck off the scene and disappeared into the safety of the hotel. We eventually departed as well, with the crook still demanding money.

Later on, my partner and I discussed the incident and realized something funny. The scared tourist rolled out without paying the guy the 300 pesos originally agreed upon. Now, a deal is a deal. The tourist should have paid the guy the 300 pesos and called it even. However, sometimes, if you mess with the bull you get the horn. We figured it served him right for all of the other unsuspecting tourists he had intimidated and ripped off.

Book A Room in Manila or Cebu City

The quickest way to book a room in the Philippines is on Agoda. They usually have the lowest rates, in my experience.