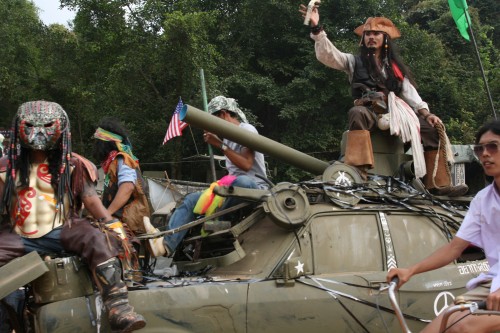 I have to admit that I didn’t get up early today. I didn’t make it to the temple to meditate and work on my blog.

Instead, I waited until around four in the afternoon and headed for a sea view. I found a nice patch of grass in a park, which is right on the water next to some docks. It was a beautiful, sunny day with a nice cool breeze. I gazed out across the ocean and thought about how peaceful the setting was—right up until the point when an unexpected marching band arrived.

What are the odds of that happening? The one place I picked for some peace and quiet was suddenly flooded with drums and brass instruments. As they started warming up, I figured that the afternoon was a total loss. I couldn’t think about writing, much less do any meditating. The drum section wouldn’t allow it.

However, as I started to leave and go somewhere else, my frustration turned to admiration. The marching band kicked off their routine and it was quite captivating. Instead of a ruined afternoon, I was treated to a free concert worth paying for. The flag section added a kaleidoscope of color to the performance.

I stayed until they finished practicing. Afterward, I felt foolish for my initial reaction to their showing up. Even though my plans were derailed, the afternoon ended up being quite memorable. It turned out much better than I had envisioned.

It’s a lesson learned that we shouldn’t be too quick to judge when an unexpected marching band shows up. Just because things don’t go exactly as we have planned, it doesn’t mean we’re in for a bad time.

Our #GoFundMe Campaign to open a Bikini Wax Salon got #BANNED!!! #CENSORED #CENSORSHIP

I Don’t Want a Funeral. Here’s Why…